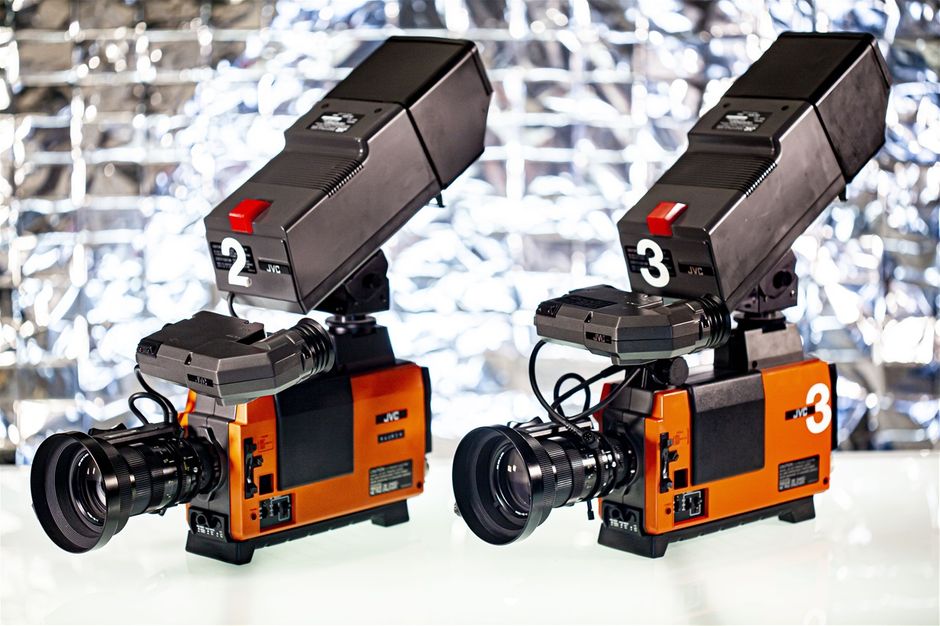 Vintage Kit JVC KY 1900 Videocameras. We keep 4 units. SPECIFICATIONSWeighing less than 8 pounds, this super-compact three-tube camera is designed without compromising quality.Three newly designed Saticon tubesHigh performance dichroic multi-layer mirror optical systemDie cast aluminum frame52dB signal-to-noise ratio9dB gain available for really low light situationsOptional 6:1, 10:1 or 14:1 servo zoom lensAutomatic iris control with weighting detection circuitAutomatic Beam Control, knee compression and white clip circuits for highlight processingAuto white balance with 8-bit memoryBuilt-in genlock and color bar generatorREVIEW: JVC KY-1900 “Back to the Future” 1984(From http://www.hdwarrior.co.uk)The JVC KY 1900 was an industrial camera in fact it was one of the few cameras to be produced with a plastic orange body making it very distinctive, JVC brought this camera out during 1982.The KY-1900 had three saticon tubes which resolved around 400 lines of resolution in their day, price was around the £4700 mark.Weighing less than 8 pounds, this super-compact three-tube camera is designed without compromising quality.The 1980s saw the introduction of the Saticon tube industrial camera like the KY1900 but they suffered from “light scaring” in other words if you were filming in a steel factory you dare not point the camera at arc welding or you stood a high chance of permanently “brurning” a hole in the tube, this was known as “burn in”. Another anomaly with tube cameras was their propensity to “stick” while panning, once again it was a simple case of overloading the tube with pin points of light and you would get a smearing affect.Early cameras were very basic indeed with most of your controls at the front, IRIS, WHITE BALANCE and VTR on and off switch, there was nothing else other than a gain switch 0 or 9Dbs and registration.On the side of the KY1900 you have 4 yellow pots…Blue-Vertical, Blue-Horizontal, Red-Vertical, Red-Horizontal, by tweaking each pot pointing the lens at a registration chart you were able to align the red and the blue against the green gun. What you were doing was changing a magnetic field on each Saticon tube as they were prone to shift with temperature, the earths natural magnetic field and bumping the camera itself.Manual registration lead cameramen to become paranoid as wo-betide you if you turned out to a shoot and forgot that all important jewellers screwdriver.Later cameras came with auto registration where you pointed the camera at a chart and pressed a button.This camera with lead acid battery attached would sit on your shoulder at around 12-14 pounds (5.44Kg-6.35Kg) no wonder we all suffer from back or shoulder problems.Does it still work ? After 30 years I fed it a 12volt power supply switched it on and waited…no picture…then I blasted my “test dolly” with a 600W LED light and a glimmer of hope but very noisy and the viewfinder still showed no pictures.Remembering these cameras need some time to heat up I left it for about 30 minutes and would you believe it…pictures.These pictures were recorded onto a Sony GV-HD700 in DV mode via the composite video input then a still was taken via the PHOTO mode on the HD700.My hat off to the Japanese video engineering department at JVC for producing a camera that can even today produce pictures after 30 years, not only that but very accurate pictures especially when looking at the colour rendition chart.This has been a roller coaster of a ride for me to finally own my all time favourite camera from the past and that distinctive orange body is so sexy and distinctive even after 30 years, todays cameras are somewhat boring in the fashion department but I have it on good authority that black is defiantly the best colour for cameras and tripod legs as reflections are kept to a minimum.